On September 6, 1620, pilgrims (102 men, women, children, and two dogs) sailed from Plymouth, England across the Atlantic on the Mayflower. Among these pilgrims were 37 Separatists known as “Saints”, and 65 “Strangers” (servants, crew, craftsmen, and merchants). It took 66 days to reach Cape Cod Bay. Initially, they settled at a vacant Patuxet village (natives died in epidemic 1616–1619). Later, they established Plymouth Colony, the first permanent European settlement in New England. About half survived the harsh winter.

Forty-one adult males signed the Mayflower Compact on-board in Cape Cod Bay on November 11, 1620. It was one of the first democratic documents to establish “government of the people, by the people, for the people”, and the official Plymouth Constitution for over 70 years. A century and a half later, it influenced the United States Constitution.

In England, there was no separation of church and state, and Separatists believed the head of the church was Jesus (not a Pope or King). Separatists were considered traitors; even if they were educated, they did low paying jobs. In 1607, they sold their homes and walked 60 miles from Scrooby, England to Leiden, Holland, where they could worship safely. Most adults and children, who’d been farmers in England, wove cloth six or seven days a week in Leiden textile factories. After 12 years, they received funding from English merchants to sail and settle in a “New World”. They repaid the debt by sending timber, fur, and fish back to England until 1648. The Pilgrims* endured extreme hardship and risk, cooperated with natives, and settled Plymouth Colony.

The area had been inhabited by native tribes for over 12,000 years, and other Europeans had arrived. By the time the Pilgrims arrived, 95% of the natives had died in an epidemic. The Pokanoket** leader, Massasoit Ousamequin (aka Massasoit), worried about invasion by rival tribes. He sent English speaking Tisquantum (aka Squanto) to negotiate with the barely surviving colonists on March 22, 1621 (equinox). Squanto interpreted, and taught them to farm, fish, and hunt beaver. Massasoit made a treaty with the colonists, that was kept as long as he lived.

One fall day, four settlers went to hunt food for a harvest celebration. Hearing gunshot, Massasoit and 90 men arrived to see if the settlers were preparing for war. Realizing that they were only hunting for a harvest feast, Massasoit sent his own men to hunt deer. They ate deer, corn, shellfish, and roasted meat in a feast that lasted three days. They played ball games, sang, and danced.

In 1789, George Washington called for an official “day of public thanksgiving and prayer,” but it did not become an annual event. Thomas Jefferson thought public demonstrations of piety to a higher power were inappropriate in a nation based in part on the separation of church and state. Sarah Hale, magazine editor, lobbied Presidents for the holiday. She struck out with Taylor, Fillmore, Pierce and Buchanan, but convinced Abraham Lincoln to announce the nation would celebrate an official Thanksgiving on November 26, 1863, and the fourth Thursday of November thereafter.

How to create a costume and dress like a Pilgrim

Non-Separatist Puritans remained in England and intended to “purify” the Church of England of its Catholic practices. A decade after the Pilgrims arrived, a fleet of 17 ships and more than 1000 Puritans led by John Winthrop, a wealthy English Puritan lawyer, settled Massachusetts Bay Colony (Boston). Up to 21,000, mostly Puritans with belief in their God-given superiority, arrived between 1630 and 1642. They came with money and resources to invest in land. Indian land was exchanged for English guns, ammunition, liquor, and blankets. Under English law, territory claimed in the New World belonged to the Crown. The Massachusetts Bay Colony was a charter colony, so it was allowed to self-govern, as long as its laws aligned with England’s. Plymouth Colony tried for decades to obtain a charter from the British government but never succeeded. After the Pequot War (1636–1637), Connecticut, Massachusetts Bay, New Haven, and Plymouth colonies formed the New England Confederation in 1643–a military alliance to defend against Indians, the French, and the Dutch.

In 1641, Winthrop helped write a law allowing slavery in the Massachusetts Bay Colony. Massachusetts Bay was the first colony in New England to legalize slavery. In 1644, Boston merchants engaged in the profitable Triangle Trade. Routes were chosen based on wind and ocean currents. Rum was shipped to Africa in exchange for slaves; Slaves were sold to West Indies plantations for molasses; Molasses went back to Massachusetts, where it was fermented with yeast and water, then distilled to make rum. Rum could be produced in large quantities and sold to England. Sugarcane was so profitable that it’s the only crop in the West Indies, and fish was sold to plantation owners as food for the slaves. Slavery declined after the Revolutionary War.

Metacomet (aka King Philip) became tribal chief in 1662, after the deaths of his father (Massasoit) and older brother. In 1671, colonial leaders forced Metacom to surrender his tribe’s arms and ammunition and be subject to English law. King Philip’s War broke out in 1675. Fighting lasted fourteen months; 3000 Indians and 600 colonists were killed. Cheif Metacom was hanged, drawn, and quartered (for treason). His head was displayed on a pole for 25 years at Plymouth Colony.

In 1653, Massasoit and his eldest son sold land known as Sowams (Warren and Barrington, RI, and Somerset, MA) for 35 pounds sterling to Miles Standish, Josiah Winslow, William Bradford, and John Winslow. Montaup (aka Mount Hope) was Massasoit's ancestral home, and not part of the sale. It was a Pokanoket village on a hill that overlooks the bay, and Massasoit was buried there.

By 1680, King Charles II granted all lands formerly occupied by native people to be accessible to the English. All 7000 acres of Mount Hope were bought by four Boston investors, and became the town of Bristol in Plymouth Colony. In 1691, Plymouth Colony merged with Massachusetts Bay Colony, and became a royal colony known as the Province of Massachusetts Bay. After the Revolutionary War, William Bradford (GGgrandson of Pilgrim William Bradford) bought Mount Hope farm.

Mayflowers (Epigaea repens) were abundant near Plymouth Rock. It’s been the Massachusetts state plant since 1918. The trailing leaves are aromatic and evergreen. It blooms in early spring, and has fragrant, delicate, pink or white flower clusters, which attract butterflies. The flowers are followed by whitish berries, like raspberries. The seeds are dispersed by ants that carry the soft tissue back to their nests with the seeds attached. It is slow growing, difficult to cultivate, and has been on the endangered list since 1925. 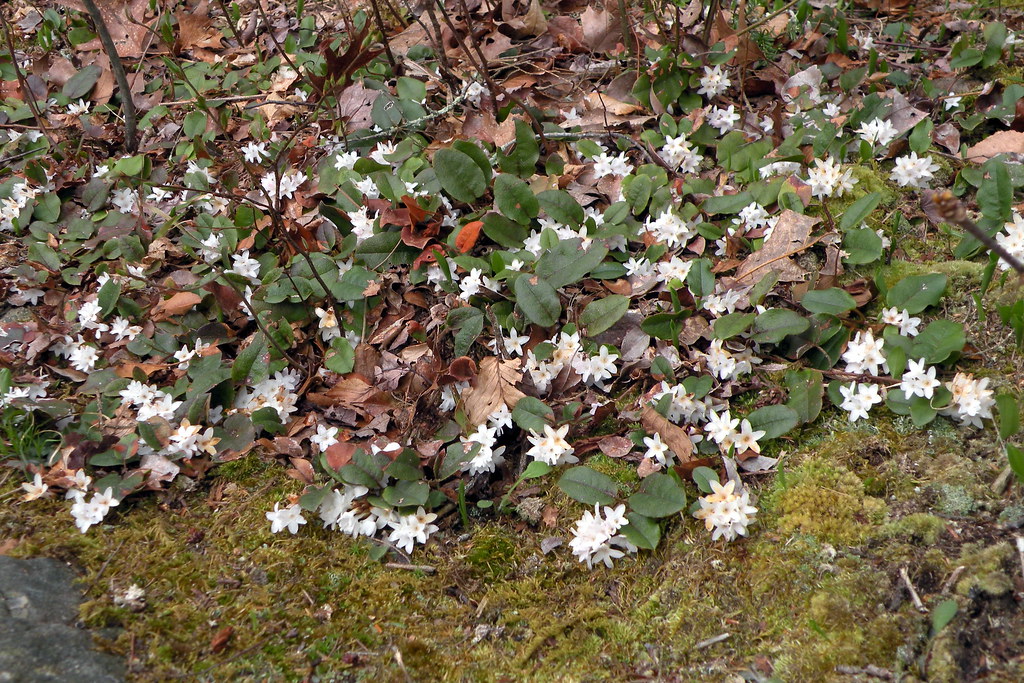 * Originally, the Plymouth settlers were not known as Pilgrims; they were known as the “first-comers” or “forefathers.” William Bradford referred to them as “pilgrimes” in a manuscript. Later, at a bicentennial celebration in 1820, Daniel Webster coined the term, “Pilgrim Fathers”. Now, nearly 400 years since the Mayflower arrived, there are millions of Pilgrim descendants.

** Pokanoket (Pauquunaukit) groups did not refer to themselves as Wampanoag until after King Philip’s War, when Pokanoket identity was criminalized in Rhode Island and Massachusetts. Today, the Pokanoket Tribe is not recognized by the federal or state governments (or the Wampanoag communities), and therefore would not get federal or state protections around land holdings and would not be able to put the land into trust. Many tribes are collectively known as Wampanoag–not all Wampanoag are ethnically Pokanoket.